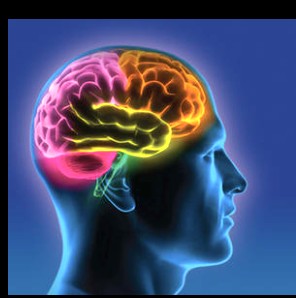 CLAIM:
A viral WhatsApp message claims that the World Health Organisation, WHO, released seven biggest brain damaging habits. The viral message encourages people to forward to whoever they care about.

VERDICT
The viral claim that the WHO released seven biggest brian damaging habits is false. All the seven habits in the claim have also been debunked by medical experts not to have anything to do with the brain.

FULL TEXT
The brain is a complex part of the nervous system that regulates the human body. It regulates thoughts, memory, emotion, touch, motor skills, vision, breathing and every other movement that the human body undergoes daily.
With these, there is no doubt that the brain is the most important organ in the human body.This is why it caught the attention of Dubawa when the viral claim alleged to have emanated from the World Health Organisation,WHO, states that the following habits are the biggest brain damaging ones.

It states that missing breakfast, sleeping late at night and high sugar consumption are among the biggest brain damaging habits. Other habits, according to the claim, include sleeping in the morning, eating meals while watching television or computer, wearing cap, scarf or socks while sleeping and the habit of blocking or stopping urine.The viral message urges people to read and forward the message. It was accompanied by a purported WHO logo. 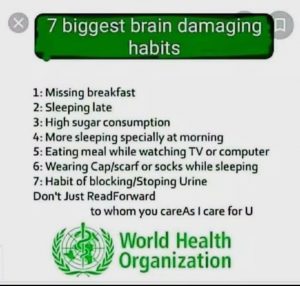 Screenshot of the claim

VERIFICATION
Dubawa began verification by taking a critical look at the message. Some typographical and grammatical errors were discovered. For example,the fourth habit highlighted on the claim states, “more sleeping specially at morning”. This is no doubt a contradiction to the rules of grammar as it connotes an incomplete sentence,with use of a wrong prefix.

Another part of the text reads, “ Don’t just ReadForward to whom you careAs i care for U”.Two words “ReadForward” were merged into one while it also carried a misplacement of upper cases of alphabets in between sentences and words, capping it up with an abbreviation “U.” This is a major sign that the WHO is not likely to send out such a message with so many grammatical errors.

Dubawa using google search discovered similar claims had emerged in 2017 and 2020 about which various online media platforms such as Dubawa and ICIR conducted fact checks to debunk the claims then. A visit to WHO Website showed that the claim was also debunked in 2020. But the claim in June 2021 rented the air again and Dubawa did a fact check on the claim. Despite all these efforts, the claim is resurfacing again in October 2021 and generating more reach on WhatsApp.

A consultant neurologist at the University of Ilorin Teaching hospital, Dr. Hamzat Bello, said he has seen the claim and noted that none of them is true.
“If you consider this in the general population, none of the claims is true,” he added

Dr. Bello said they can, however, be of adverse effect on other parts of the body especially when they are done excessively. “Missing breakfast is a precursor to many ailments such as ulcer, weight loss or gain but not a risk to the brain,” he says.Speaking on sleeping late, Dr Hamzat Bello states that research has linked poor sleep to high risks of heart disease, type 2 diabetes and depression but not directly to the brain. According to WHO recommendation, the body requires only twenty-five( 25) grams of sugar per day. “There is no direct relation between sleeping in the morning, wearing caps or socks while sleeping and brain damage” the consultant explains.
Speaking on blocking or stopping urine, Dr Hamzat Bello said in all his years of study and practice, he has not found any research to show doing this affects the brain but it’s a risk to the bladder, kidney and urinary tract. Dr. Bello said habits that damage the brain include smoking, alcohol consumption, and use of recreational drugs such as, nicotine,caffeine and drugs that contain cannabis which alters the state of mind.

According to an American online publisher of news and information on health, WebMD – Better information. Better health., causes of brain damage include poisoning or exposure to toxic substances, infection, strangulation, choking or drowning, stroke, heart attacks, tumors and neurological illnesses.

CONCLUSION
With the above investigations, Dubawa has established that the claim is false and is resurfacing for the third time in five years. Experts have also debunked the seven habits as they have nothing to do with the brain though such actions can cause harm to the body if they are all done excessively. The World Health Organisation has also debunked the claim saying the message is not from them.

Saudi Arabia Flag not part of Plan to Islamize Nigeria