Is salt a snake repellant? 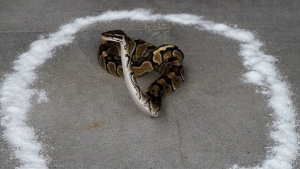 Claim
A viral WhatsApp message claims salt could work as a snake repellant and fire extinguisher.

Verdict
Dubawa’s research reveals that salt has not been proven to be a repellent for snakes, because it has no chemical content that affects snakes in any form. Also, the claim that salt can serve as a fire extinguisher in the kitchen is not true!

Full story
Snakes are reptiles found virtually in all parts of the earth – the forest, desert, water and most commonly anywhere rodents, their prey habitat. The way they unhinge their jaws to feed and their tendency to bite inspires fear and disgust in a lot of people. Some snakes are venomous and are capable of biting victims to death instantly.
Nonetheless, the fear of snakes over the years has been exaggerated even though snakes are harmless.
Recently, a WhatsApp user, Michael Afolayan, circulated a write-up claiming that salt can repel snakes and it can also be used to prevent fire in the kitchen.
The write-up which has gone viral also claims that the rainy season is a season for snakes to come out of their hibernation to a cooler environment occupied, thereby increasing the chances of contact with humans.

Verification
Dubawa found research by a pet company, Insect Cop in the United States titled “salt against snakes.” The research revealed that using salt to repel snakes is a rumor that originated from an old wife’s tale that was not researched. According to Insect Cop, the tale is dated to pre-goggle era where such methods are only based on a general knowledge that most animals will probably turn tail if you fling a handful of rock salt into their faces .
Another research by Oddly Cute Pets Company also in the United States, notes that the old wives’ myth was generated from the fact that salt affects slugs and snails to the point of death. The research concluded that salt does not repel snakes and it won’t go out of it’s way to avoid salt.
Further Google search led to an article by Tibs Bulletin claiming that a 50-50 mix of salt and crushed garlic or garlic and onion crushed together can serve as a snake repellant if sprinkled around the edge of a property as the strong smell of the combination can irritate snakes.

Expert opinion
A consultant veterinarian with the Kwara State Veterinary Service, Dr. Bukky Richard, said snakes can only be affected if kept in a salt solution for a long time.

Dubawa met with an animal keeper with the University of Ilorin the zoo, Kareem Yusuf, who shared his experience in the care of snakes. He explained that snakes don’t like hot temperatures and they come out more in the hot season and not in the cold or rainy season.
“Snakes don’t lick or slurp their food , they bite, strangulate and swallow” he says. He added “you may make the snake blind by pouring salt into its eyes but you can’t keep them away just by pouring salt in your water closet or boundaries of your home”. He also agrees that soaking a snake in a strong concentration of salt is acidic and can kill any animal including snakes.

List of ‘seven biggest brain damaging habits’ not from WHO as...