Claim
A facebook user is spreading a claim on social media that the National Identity Management Commission is giving out five gigabytes of data and ten thousand naira as part of an alleged “ Verification Reward Programme.The programme is claimed to be for those who have been using a phone sim card for more than three months on any network.

Verdict
Dubawa’s finding reveals that the claim is just a scam emanating from a facebook user.The claim was widely shared on WhatsApp.While the claim cannot be found on the website or any of the social media handles of the National Identity Management Commission, the media unit of the commission has refuted the claim, saying anyone who applies does so at his or her own risk.

Full story
A facebook cum WhatsApp message going virile on social media claims that the National Identity Management Commission,NIMC,is running a verification reward programme.The program is presumed to be for those who have been using their sim card for more than three months.The claim states that deadline for the application of the reward programme is 30th of September 2021. It urged interested applicants to click a link to apply for the reward. A click on the link led Dubawa to a page asking prospective applicants to click a check button to find out whether they are qualified for the alleged reward. A second click on the page led Dubawa to another page with an instruction to enter your phone number.This is to find out whether applicants phone numbers have been selected to be among the two thousand,four hundred customers selected to receive the award.The next click congratulated Dubawa and rolled out three steps to undergo to qualify.These include sending the link to twelve whatsapp groups after which one will get the five gigabyte data and a sum of ten thousand naira within two minutes.These explains why it went viral with over five hundred shares, three hundred comments.It also had a like and love emoji from a Joseph and Monica Akinyi. One Ernest Zibkere in his comment acknowledged the credit of the data.Another comment from Lydia Chioma states “ I followed all the verification steps and after two minutes,I found out that my MTN increased by ten thousand.” These are just a few among the comments running on the page.Since Dubawa was still verifying the authenticity of the claim,it did not click further to avoid spreading fake news. 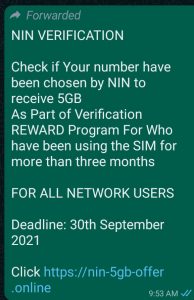 Verification
Dubawa started verification by visiting the website of the National Identity Management Commission and all its social media handles only to find out that there was no such claim on these platforms .A google search also revealed that no such claim existed. Dubawa finally put a call through to the NIMC media office where one of the commission’s spokespersons,Hafsah Abdulrazaq, refuted the claim and rolled out a disclaimer:”The message did not emanate from NIMC and we are not party to it.” She added, “ Anyone who follows the link is at his own risk.“ 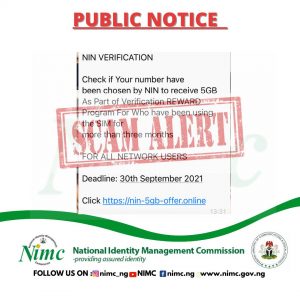 Conclusion
It is not true that the National Identity Management Commission is running a verification reward programme.The two thousand and four hundred acclaimed winners are victims of a scam. All the social media handles and websites of NIMC do not advertise such a programme. And the media office of NIMC has also refuted the claim with a warning that whoever applies does so at his or her own risk.

Tatabu Bridge Collapsed in 2017,not recently as Claimed in Viral Picture