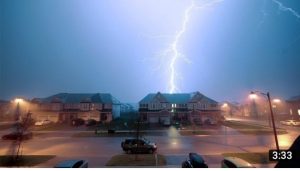 Claim
A claim, alleged to have emanated from the National Orientation Agency, states that taking shelter under metallic structures and holding metallic objects during rainstorms is a risk to lives and property.

Verdict
The National Orientation Agency says it is a fake claim which has been resurfacing on online platforms for the past five years. The Assistant press director of the Agency, Paul Odenyi, says the claim resurfaces every raining season and enjoins the general public to disregard it. But experts say not all should be disregarded as rain and lightning carry energy capable of destruction.

Full story
A WhatsApp user sent out a claim that touching or holding metal during violent rainstorms and lightning flashes should guard against risking their lives by touching or holding metals during violent rainstorms and lightning.
The public notification, allegedly from NOA, states that in order to avoid taking risks to life and property, the general public should avoid taking shelter under metallic structures and not to hold metallic objects. It gave five other safety tips to avoid during rainstorm and lightning to include the following:
1.Don’t use a mobile phone when it is raining.
2.Switch off your Television set.
3.Stay away from transformers and electronic objects.
4.Stay away from mirrors and sharp objects.
5.Avoid taking baths when it’s raining.

This claim has gone viral on social media.

Verification
Dubawa began verification by contacting the National Orientation Agency’s headquarters in Abuja where the Assistant Director of Press, Paul Odenyi, refuted the claim in a telephone conversation.

“This is not the first time this is circulating around social media. It has been circulating every rainy season for the past five years,” he said.

Mr Odenyi called the attention of this writer to a press release urging the general public to disregard what he described as “recurrent viral fake news.”

The release implores Nigerians to seek correct information regarding protection of lives and property during the rainy season from the Nigerian meteorological Agency ,NIMET, and to always verify NOA’s Press statements from its official handles.

Dubawa went further to research on whether the claims could protect people’s lives and property by speaking to a professor of physics from the University of Ilorin, Abiodun Adimula.

Professor Adimula told Dubawa that there is no conclusive evidence that you can’t use your phone while it is raining but there is no doubt that the energy that radiates from lightning can cause, especially when unprotected while using earthings or surge protection.

Giving a breakdown of the claim, Professor Adimula explained that the rain vibrates electromagnetic energy which can cause harm to a phone carrier.

“It is advisable to switch off electronics during the rain because you cannot predict lightning which can interfere with signals into your electronics or even be transmitted through your wall sockets,”he added.

He, however, objected to the view about the transformer, adding that the transformer has an in-built protective device.
Another scientist at the University of Ilorin, Professor Joshua Obaleye, explained that mirrors and glass objects can reflect lightning into the eyes and this can cause damage to the eyes.

“Climate change inflicted its own share of change on physics and may be harmful if care is not taken,” he says. He kicked against the claim that you can’t take a bath when it is raining, saying this is in the closet of the home and does not have direct contact with rain or lightning.

Using Google search, Dubawa also discovered articles by a research institute ,Insurance Information Institute in New York supporting the claim that wearing metal on your body during lightning can attract radiation harm to lives and that lightning also destroys electronics but can be protected with the use of surge suppressors if installed correctly.

However,there is no research whatsoever to defend the claim that people should avoid taking baths when it is raining or stay away from mirrors and glass objects during rainstorms.

Conclusion
It is true that lightning during thunderstorms can affect metallic objects, electronics and its hosts, especially if unprotected by surge protectors.It is also true that mirror and glass objects can reflect lightning to damage the eyes. However, it is not true that ordinary rain without thunder and lightning will affect people and their property as suggested by the claimant. It is also not necessary to avoid taking bath during the rain without switching off the transformer, as experts have confirmed that transformers have built-in protectors.The National Orientation Agency has gone ahead to refute the originator of the claim and has issued a press statement to this effect on all its social media handles.