By Iyabode Olorunsola and Silas Jonathan

Claim
A screenshot depicting the Nigerian Flag, NEMA flag alongside the Saudi Arabian Flag making rounds on social media platforms suggests that it is part of plans to Islamize Nigeria. 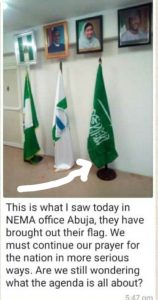 Verdict
The screenshot making the rounds on various social medical platforms depicting the flag of Nigeria,NEMA,and that of Saudi Arabia is actually the norm at any official event between two countries.This time the event is actually a bilateral engagement with Saudi Arabia Agency on Friday the 13th of August 2021

Full Story
A picture surfaced on the internet showcasing the flag of Nigeria, that of the National Emergency Management Agency (NEMA) and the flag of Saudi Arabia. The flags were arranged in a building that appears to be a building in which the claimant alleged was the NEMA national Headquarters in Abuja.

Above the flags, pictures of the President Buhari, Sadiya Umar Farouq the Minister of Humanitarian Affairs, Disaster Management and Social Development and the NEMA boss, Muhammadu Alhaji Muhammed.
The National Emergency Management Agency of Nigeria was established via Act 12 as amended by Act 50 of 1999, to manage disasters in Nigeria. Therefore, from inception, NEMA has been tackling disaster related issues through the establishment of concrete structures and measures.
The claimant implies that the presence of the Saudi Flag signals plans to Islamize Nigeria. “This is what I saw today in NEMA Office Abuja, they have brought out their flag. We must continue our prayer for the nation in more serious ways. Are we still wondering what the agenda is all about?” The claimants warn.

On Twitter, the same claim resurfaced, with the heading: “This is Nigeria National Emergency Management Agency Office, Abuja. #Taliban”. The post attracted over 2,000 interactions. One user, Roboticanimation (@newbreed1914), even commented that “This confirmed my understanding that Nigeria is stylishly under Saudi Arabia Influence.” Another user, Badman Khaliberry (@Iam_khaliberry) added that “That’s because buhari is a religionist , him time go finish soon ,,, we will return back to a progressing Nigeria.”
The post attracted similar comments that suggested users ‘believability towards the claim. It was also shared by a Facebook user, Dr.Josh onyekwelu Chuckuemeka who implied that “it is evidence that plans to islamize Nigeria are on course with the hoisting of this flag.”
This claim, emerged days after killings in Jos unfolded along religious lines. A sensitive topic in the Nigerian public sphere that if ignored could trigger discord and saw a seed of distrust among the populace. As regards, DUBAWA ventures to uncover the truth in the matter.

Verification
Preliminary investigations carried out by DUBAWA, revealed that the Saudi Arabian flag was actually hoisted at the NEMA office, Abuja. However, the primary reason behind this act was merely for symbolic courtesy. On the Friday the 13th of August 2021 The National Emergency Management Agency NEMA held a monumental event to commission a newly upgraded ‘Emergency Call Centre’ Supported by the King Salman of Saudi Arabia.

NEMA MD, Mustapha Habib Ahmed and the Saudi Arabian representatives while at the event in full glare of the flags behind them

The NEMA MD, delivering a speech at the event

Hence, the flags, we’re placed there during the event to showcase the ongoing mutuality between the two nations, which in this case, Nigeria and Saudi Arabia.
The event was covered by National Dailies alongside the actual narrative that brought about the Saudi Arabian Flag in the NEMA office.

Still at the event.
DUBWA further reached out to NEMA via a phone call as regards the claim. In response, NEMA’S Head of Media and Public Relations, Manzo Ezekiel explained that: “the event was an official engagement and it was normal to hoist Flags of countries involved. He acknowledged that he was aware of the heralding claims and clashes that “the allegation is false as the Agency has not hoisted any strange flag. The Nigerian National Flag and that of NEMA are the only flags in the offices of the Agency.
“It is unfortunate that the picture in circulation was taken by suspected mischief makers on Friday 13th August 2021, at the commissioning of NEMA’s newly upgraded Emergency Call Centre.
“The Centre was upgraded with support from the King Salman Humanitarian Aid and Relief Centre, that has also provided food assistance to persons affected by insurgency in the North East and banditry in the North West in 2018 and this year.”

Dubawa went further to examine the image using a tool called the image forensics tool. Results show that the image was NOT altered in any way and also did not emerge anywhere on the internet before Friday 13th, 2021 but after (the day of the event at NEMA).

Results of the acclaimed image subjected to forensics. Results show the image was not altered and most have been taken on the day of the event.

Conclusion
The Narrative attached to the acclaimed picture making the rounds is false. The Saudi Arabian flag, though hoisted at NEMA office, was only because of an event held to commission the Emergency call centre supported by King Salman of Saudi Arabia. This claim is false.

False! What’sApp is not ending ‘tomorrow’ as claimed in this viral audio

Is salt a snake repellant?

False! What’sApp is not ending ‘tomorrow’ as claimed in this viral...