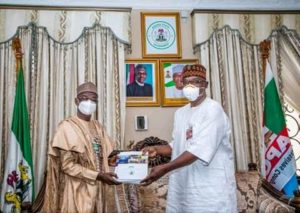 Kwara State Governor AbdulRahman AbdulRazaq on Tuesday promised to support the rebuilding of the NTA structure that was recently gutted by inferno in Ilorin, the state capital, saying the operations and programmes of the station give Kwarans a sense of belonging in the national setting.

“I will direct the Honourable Commissioner for Works, with whom I went to the scene of the incident, to do an assessment of the damage and we will move on from there…we will definitely take ownership as we have always done,” AbdulRazaq said when the Director General of the NTA Yakubu Ibn Mohammed paid a courtesy visit to the Governor in Ilorin.

AbdulRazaq said the NTA means so much to the people of the state and his administration would continue to support it at all time.

He urged Ibn Mohammed to consider reviving the NTA community station in Patigi because of its wide coverage and importance to the people of Kwara North.

The DG, for his part, commended the statesmanship and sense of duty of the Governor on the night of the fire incident, saying it was a rare show of leadership which has typified the reign of AbdulRazaq in Kwara State.

“I am in Ilorin to assess the extent of the damage caused by fire in our station here. It is on record that Your Excellency — I say this with all sense of responsibility — displayed a great sense of statesmanship and responsibility by being one of the first persons to visit NTA Ilorin when the unfortunate incident occurred,” Ibn Mohammed said.

He urged the governor to come to the aid of the NTA Ilorin which the DG described as a property of the people of Kwara State.

Ibn Mohammed, responding to the Governor’s request on NTA Patigi, said it was covered in the 2020 budget, adding however that the allocation to the project was not enough to go so far this year.

He also commended the Governor for his giant strides since his inauguration while also commiserating with him on the recent death of his father Alhaji Abdul-Ganiyu Folorunsho AbdulRazaq (SAN).

Ibn Mohammed also congratulated the Governor on the appointment of Prof. Ibrahim Gambari as the Chief of Staff to the President, saying the appointment was well-deserved and again underscored the quality of hands from Kwara. 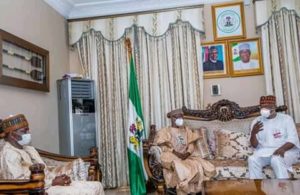 Commissioner for Energy commends Governor Abdulrahman Abdulrazaq for Appointment of Fatimah Mohammed as one the SA’s on SDGs.