Assembly of Kwara calls for construction of over head bridges in Ilorin.

The house of assembly of Kwara state has advocated the construction of over head bridges on strategic roads in Ilorin the state capital to avert traffic congestion and accidents.

This was contained in a motion by Abdulkareem Babatunde Paku.

Presenting the motion titled need for pedestrian bridges in Ilorin to avert road accidents and ease vehicular movements, Abdulkareem Babatunde Paku says the lives of residents should be protected from avoidable road accidents.

This he believes can be achieved with the construction of pedestrian over head bridges.

Members are of the opinion that so much man hour are wasted inside traffic congestions as such the need for the over head bridges for pedestrians using the roads in the state capital.

Construction of the bridges they suggested should be at strategic locations in the metropolis.

Also at the plenary, the legislators appealed to the state governor to explore avenues for workable public private partnership at efficient collection, transportation, storage, treatment and management of bio medical wastes for private and public hospitals in the state.

This was contained in a motion by member representing Share, Oke Ode state constituency, Abdulrazaq Owolabi in a motion titled need to put in place efficient medical waste management system for the state.

The legislators believe this will ensure the sanitization of the environment. 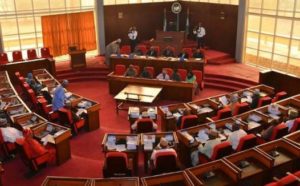