The suspended chairman of the Economic and Financial Crimes Commission, EFCC, Ibrahim Magu, has been released from detention.

Magu, according to source was released to his lawyer, Tosin Ojaomo, this evening.

The suspended Acting Chairman of EFCC has been undergoing interrogation under detention since he was invited by a panel set up by the Presidency last week to probe allegations of corruption against him.

The Inspector General of Police had in a letter addressed to Ojaomo dated July 14 denied detaining Magu advising him to direct his petition to the Presidential Panel. 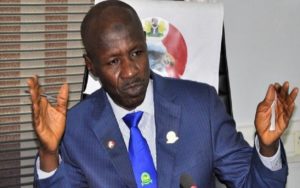